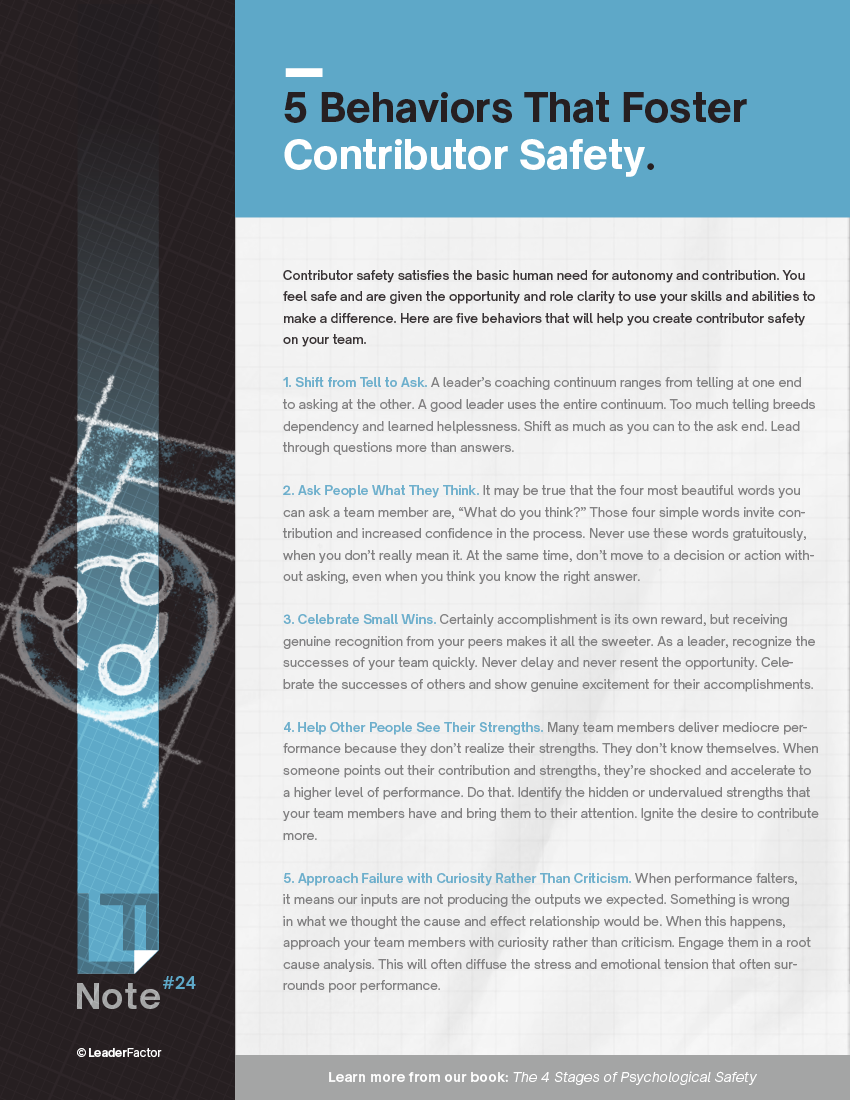 Contributor safety satisfies the basic human need for autonomy and contribution. You feel safe and are given the opportunity and role clarity to use your skills and abilities to make a difference. Here are five behaviors that will help you foster contributor safety on your team.

1. Shift from Tell to Ask

A leader’s coaching continuum ranges from telling at one end to asking at the other. A good leader uses the entire continuum. Too much telling breeds dependency and learned helplessness. Shift as much as you can to the ask end. Lead through questions more than answers.

2. Ask People What They Think

It may be true that the four most beautiful words you can ask a team member are, “What do you think?” Those four simple words invite contribution and increased confidence in the process. Never use these words gratuitously, when you don’t really mean it. At the same time, don’t move to a decision or action without asking, even when you think you know the right answer.

4. Help Other People See Their Strengths

Many team members deliver mediocre performance because they don’t realize their strengths. They don’t know themselves. When someone points out their contribution and strengths, they’re shocked and accelerate to a higher level of performance. Do that. Identify the hidden or undervalued strengths that your team members have and bring them to their attention. Ignite the desire to contribute more.

5. Approach Failure with Curiosity Rather Than Criticism

When performance falters, it means our inputs are not producing the outputs we expected. Something is wrong in what we thought the cause and effect relationship would be. When this happens, approach your team members with curiosity rather than criticism. Engage them in a root cause analysis. This will often diffuse the stress and emotional tension that often surrounds poor performance. 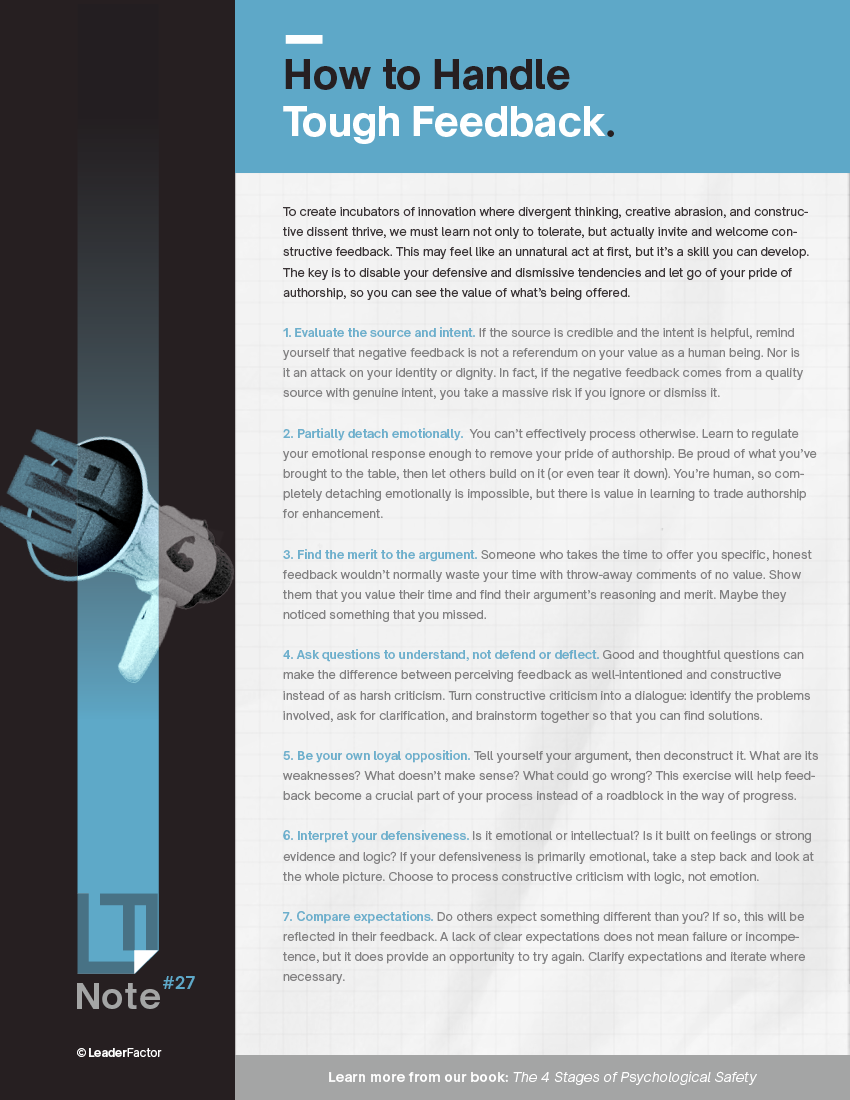 How to Handle Tough Feedback.

To create incubators of innovation where divergent thinking, creative abrasion and constructive dissent thrive, we must learn not only to tolerate, but actually invite and welcome constructive feedback. This may feel like an unnatural act at first, but it’s a skill you can develop. Here’s how: 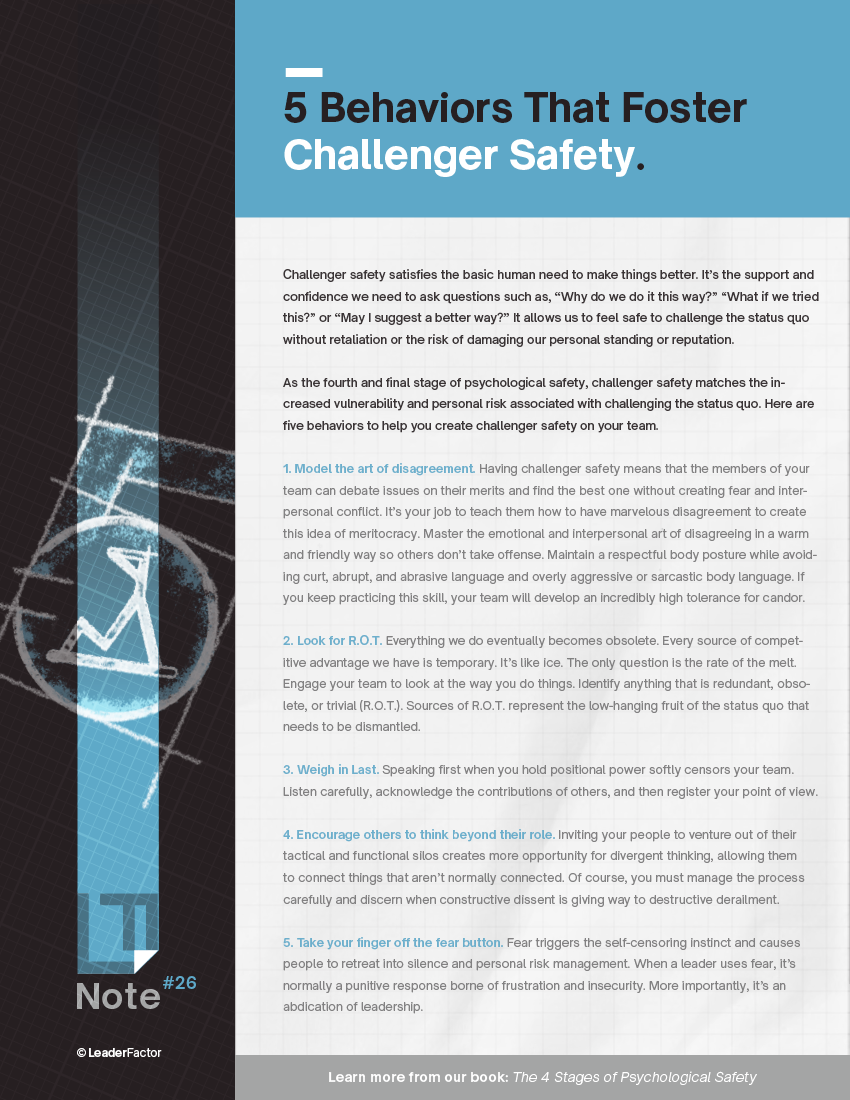 Challenger safety satisfies the basic human need to make things better. It’s the support and confidence we need to ask questions such as, “Why do we do it this way?” “What if we tried this?” or “May I suggest a better way?” 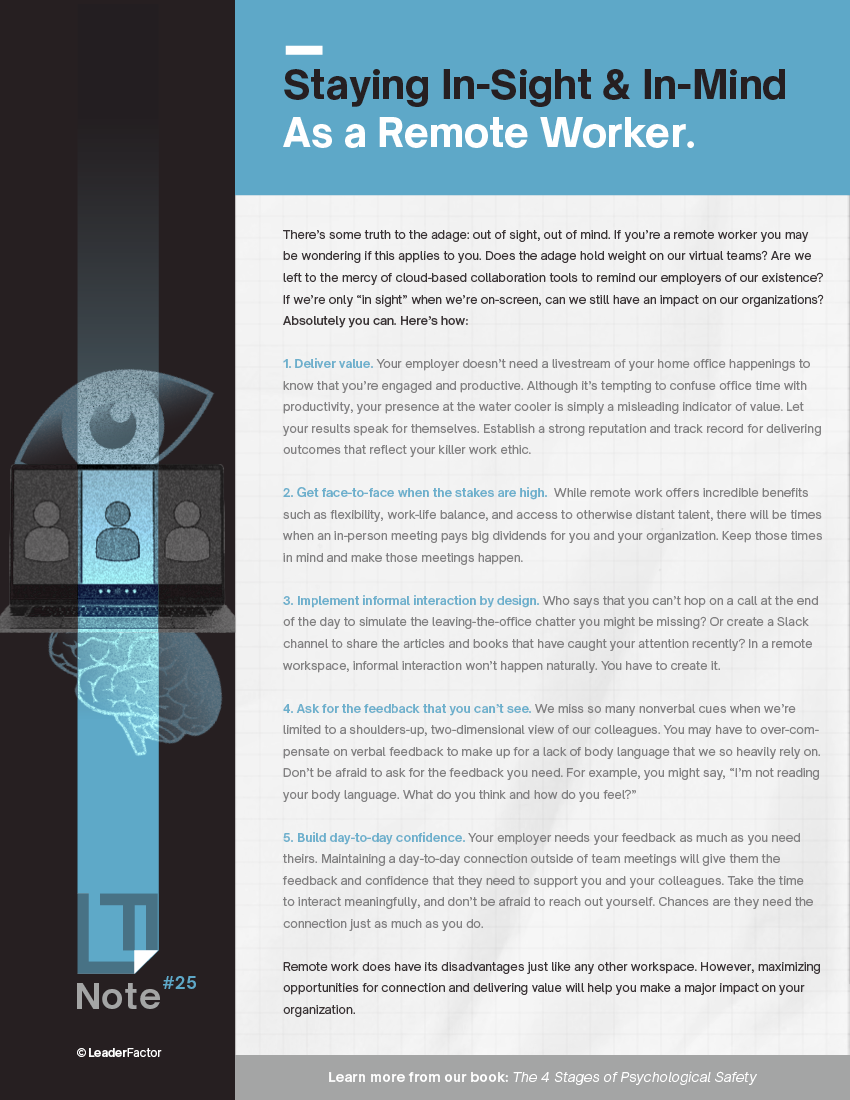 Staying In-Sight and In-Mind as a Remote Worker

There’s some truth to the adage: out of sight, out of mind. If you’re a remote worker you may be wondering if this applies to you. Does the adage hold weight on our virtual teams? Are we left to the mercy of cloud-based collaboration tools to remind our employers of our existence? If we’re only “in sight” when we’re on-screen, can we still have an impact on our organizations?